Here we go again with a little Red Pen Tidbit! Last time we looked at the variety of uses for apostrophes, and before that was our introduction to grammar and usage.

This week, we’ll explore a few tricks to remember the difference between who and whom.   Who will be joining us today?

Before we get started on identifying the differences between who and whom, we first have to know what they are…

Relative Pronouns that you use when referring to people (and sometimes animals)!

Oh… You already knew that? Do you know what a relative pronoun is?

They’re a type of pronoun (take the place of a noun), and they introduce a dependent clause, which is a clause (contains a subject and predicate… as opposed to a phrase) that can’t stand on it’s own as a sentence.

Okay… I have one for you! What is important to know about pronouns?

For example: The girl took her car to the shop.
Pronoun: her — Antecedent: girl

One more thing… Do you know the difference between a subject and an object in a sentence?

For example: The girl took her car to the shop.
Subject: The girl  — Action: took  —  Object: her car

Well, then… Since you already know all of this, let’s jump into our Tidbit!

This lovely relative pronoun is used when you are referring to the subject of a sentence. You’ll notice that if we’re using the pronoun in a separate clause, then there are two subjects and two predicates. I will only focus on the clause with “who” in it.

– I wanted to know who stole the cookies from the cookie jar, but no one was around to ask.
—- Subject: who — Antecedent: (inferred, some person) — Action: stole — Object: the cookies

– Who is in charge around here?
—- Subject: Who — Antecedent: (inferred, some person) — Action: is (linking verb) — Object: N/A (linking verbs don’t use objects)

NOTE: One trick that some writers use is the “he/she/they” trick. If you can replace ‘who’ with he or she, then it is correct. It may need a bit of finagling with the verb order, but it almost always works!
— The woman, she wore the sparkling ball gown…
— … he was playing fetch…
— She is in charge around here? (OR)  Is she in charge around here?
— They ate the last cookie? (OR)  Did they eat the last cookie?

Can I ever break this rule? DEPENDS.

Some people use the words ‘who’ and ‘that’ (another relative pronoun) interchangeably. However, ‘that’ refers to non-living things and is used in informal writing and dialogue.

This slightly irritating relative pronoun is used when you are referring to the object of a sentence. Sometimes this pronoun is preceded by a preposition, which will help you determine if you should use who or whom.

You’ll notice that if we’re using the pronoun in a separate clause, then there are two subjects and two predicates. I will only focus on the clause with “whom” in it.

– The woman, whom we saw dancing with the prince, wore the sparkling ball gown.
—- Subject: we — Action: saw dancing — Object: whom — Antecedent: The woman

– He knew whom I presumed had stolen the cookies from the cookie jar, but no one was around to verify my presumption.
—- Subject: I — Action: presumed — Object: whom — Antecedent: (inferred, some person)

– Whom will you ask about the last cookie?
—- Subject: you — Action: will… ask — Object: Whom — Antecedent: (inferred, some person)

NOTE: This time, try another trick that some writers use: the “him/her/them” trick. If you can replace ‘whom’ with him or her, then it is correct. It may need a bit of finagling with the verb order, but it almost always works!
— … her we saw dancing… (OR)  … I saw her dancing…
— … for him I had brought a gift… (OR)  … I had brought a gift for him…
— Should they go to her for instructions?
— Will you ask them about the last cookie?

Can I ever break this rule? *Hides from the grammarians…* YES, in dialogue and informal writing.

How often do we use ‘whom’ in everyday speech? Our characters are often going to mimic these styles, which means they’ll often use ‘who’ or even ‘that’ when they talk.

Take out your trusty Writer’s Notebook, and open to the next blank page. Try out a few sentences using each relative pronoun.

Then, try using them in dialogue! Let me know how it goes in the comments below!

Those tricky one-word or two-word combos! — I want to know what you would like our next Red Pen Tidbit (June 7th) to be about!

Good luck on your “Who vs. Whom” adventures! If you need a bit more help after this tidbit, then please check out these other helpful sites. 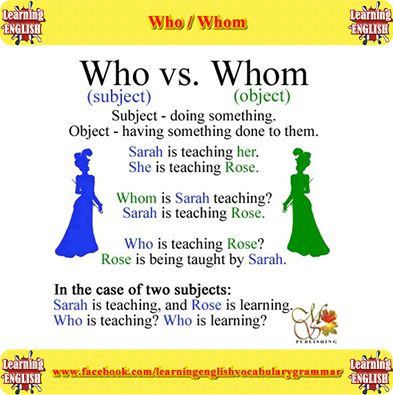