Welcome to your crash course in phrases of the dependent variety! Do you feel like you’re at school, yet? Don’t fret, there’s no test. This time.

Let’s start with the basics: What is a phrase?

A phrase is a word or group of words that expresses a single concept within a sentence. It is dependent, which means it cannot stand alone.

Phrases are a great way to take a simple sentence to the next step for you reader as you work your way through the writing process:

You may be thinking something along the lines of grammar class right about now. That’s okay! I’ll try to go easy and reign in the English teacher part of me. (You read try, right?)

I’ll include an example sentence and explanation for each type of phrase. Be sure to notice that with each phrase addition, I’m either giving extra details about the characters or hinting at their emotions.

This particular sentence is trimmed down to the basic form from my flash fiction story “Poisonous Behavior.”

An appositive phrase is one of the easiest phrases to add. It simply renames a noun or pronoun right beside it with another noun phrase. It uses commas to separate the phrase if the additional information is nonessential.

“Oh.” Naomi, the third receptionist at the company in three months, dropped her pen. “Um, he uh- he… resigned a couple days ago.” She whispered as their boss, a broad-shouldered man with a trim goatee, walked in.

Each of the above appositive phrases rename the nouns beside them (Naomi and boss). The reader is given a bit more information about each character. With the first phrase, the reader may also start wondering why Naomi is the third receptionist in three months.

We add prepositional phrases to our writing often without thinking about them. They begin with a preposition, and they act as a noun, adjective, or adverb within the sentence.

As you can see, you have a multitude of choices here. According to English Club, there are upwards of 150 different words that can be used as prepositions in the English language.

“Oh.” Naomi dropped her pen and reached under her desk to retrieve it. “Um, he uh- he… resigned a couple [of] days ago.” She pulled her wavy brown hair from her eyes and clicked her pen.

This particular example uses several prepositions. The best thing to remember about these phrases is that they answer questions:

1. Where is Naomi reaching? — under her desk
2. What kind of couple? — of days ago (notice that the preposition isn’t always needed — sometimes it’s implied)
3. Where did she pull her hair? — from her eyes

Don’t worry here either… I won’t get into the different kinds of prepositional phrases or the variety of questions they can answer.

A participial phrase is a formed from a derivative of a verb using either the past or present participle. In short, a participle usually ends in either -ed or -ing. These phrases function as adjectives in a sentence.

“Oh,” Naomi said, reaching under her desk for the pen she dropped. “Um, he uh- he… resigned a couple days ago.” Clicking her pen,she pulled her wavy brown hair from her eyes.

These phrases offer the reader a chance to see Naomi’s reaction as she speaks. At first, she’s struggling to hold onto a pen that she uses every day during this conversation, which gives insight into her nervousness of the topic. Then, she’s focusing on the pen and her hair instead of the person to whom she’s speaking.

Pause right here before reading any further. A gerund is a verb that acts like a noun in a sentence. (Say what?) It uses the -ing suffix, and it’s often found right after a verb unless you place it at the beginning of a sentence.

Helpful hint: If you can replace the phrase with the word ‘it,’ then you have a gerund phrase. (I’m sure there are exceptions to that rule, but it’s pretty solid.)

— Pause right here before it. (This is still a complete sentence… ambiguous, but complete.)

Dropping her pen after that question was a mistake. “Oh,” she hesitated, no longer able to avoid clicking the pen after picking it up. “Um, he uh- he… he resigned a couple days ago.”

First, notice that I could replace each of these phrases with the word ‘it’ and still have complete sentences. (Yay! Gerunds!)

Okay, enough crazy talk…. Each of these phrases give insight to Naomi’s internal conflict. She doesn’t know what should or shouldn’t be said, so she’s dealing with it through her pen.

Don’t shoot the messenger, but I have another verb for you that acts like a noun in a sentence. Say hello to the infinitive, which contains the words ‘to’ plus a verb (to breathe, to write, to laugh).

“Oh.” Naomi dropped her pen and reached under her desk to retrieve it. “Um, he uh- he… resigned a couple days ago.” She pulled her wavy brown hair from her eyes and clicked her pen to avoid further discussion.

In most cases, an infinitive answers a simple question: Why? You can see that question answered in both of the instances above, which allows the reader to better understand ‘why’ she is doing what she’s doing.

1. Why is Naomi reaching under her desk? — to retrieve her pen
2. Why is she clicking her pen? — to avoid discussing the topic at hand

We finally have a noun! However, a noun phrase doesn’t only include a noun… We also have to include all its modifiers: article, adjectives, pronouns — oh my!

“Oh.” Naomi dropped her favorite purple and gold fountain pen and reached under her desk to retrieve it. “Um, he uh- he… resigned a couple days ago.” She pulled her wavy brown hair from her eyes.

In this instance, we simply look for the nouns, and we determine what needs clarification. These details could explain the motivations behind the character’s actions (her favorite pen — which no longer clicks in this scenario) or detail her physical attributes (wavy brown hair).

Detailing the nouns allows you to create a vivid description of your character’s life. 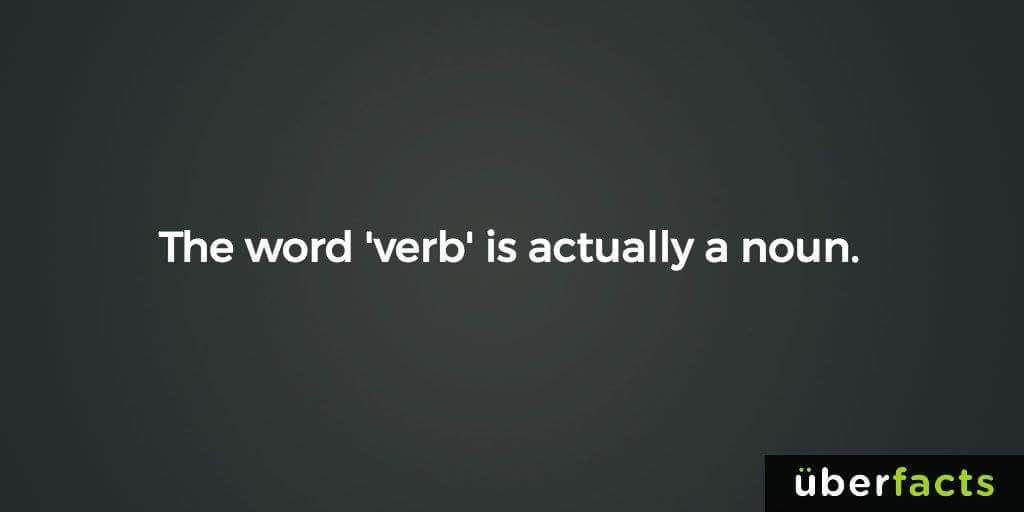 I promise, this is a verb used as a verb! Similar to the noun phrase, a verb phrase doesn’t only include the verb… We have to invite all those pesky modifiers to the party, too. Several tenses include more than just one word:

The other modifiers are the obvious adverbs and the less-obvious preposition (they like to tag along occasionally).

“Oh.” Naomi abruptly dropped her pen. “Um, he uh- he… resigned a couple days ago.” She would have pulled her wavy brown hair from her eyes, but their boss showed up at that moment.

These phrases are often short, but they provide you with a bit of insight into characters, too. Notice that Naomi was only considering pulling her hair back this time, which asks the reader to visualize her hands stuck in midair as the boss walks in. The reader may also question this sudden action.

If you’d like a bit more information about any of these types of phrases, feel free to check out the links below:

Please feel free to share your comments and/or resources with me below!

This post is part of the #AuthorToolboxBlogHop (hosted by Raimey Gallant), which is dedicated to helping writers become stronger and more confident in their craft. Click here for more information, to continue hopping through other posts, or to join in!